The River Dodder is where I spent countless hours fishing when I was younger, often leaving the house as the sun rose and only returning home when it wasn’t possible to see where I was going any longer! I hadn’t fished it in over fifteen years until the opening day on St. Patricks Day, 17th March, and although much of the river has changed over the years it is great to see this fantastic amenity in the middle of Dublin still holds fish.

I had the idea a few weeks ago to give the opening day a shot with the ultra-light gear normally used for LRF’ing (Light Rock Fishing). While I generally prefer the fly, the fact that the river was recently stocked with a good number of decent sized trout meant that there was the opportunity to try something a bit different, with a good chance of landing something a bit bigger.

I was joined by Sam Roche and Dave Fitzpatrick – both keen lure anglers – and we encountered several good sized fish throughout the day. There were plenty of others out fishing, and it was great to see that the majority of fish we saw being caught were released. We fished the stretch at Milltown all the way up to Lower Dodder Road, and then back down again. 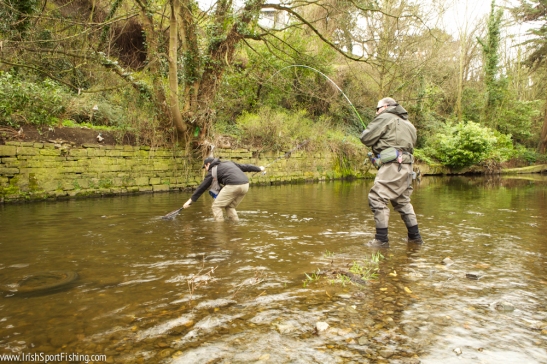 Sam gets the runaround from the first good fish of the day! Dave doing the honors with the net.

The line we were using was as light as 3lb fluorocarbon fished straight through, or 0.3PE braid. The most effective lure was a tiny jig-head from Wapsi (1/80 oz) with a 2″ soft plastic lure on the end. Something along the lines of the Illex Jacoknuckle or a Maria Worm-Actioned Fish. These tiny lures swung around beautifully with the flow, and they seemed to work best when fished as slow as possible. 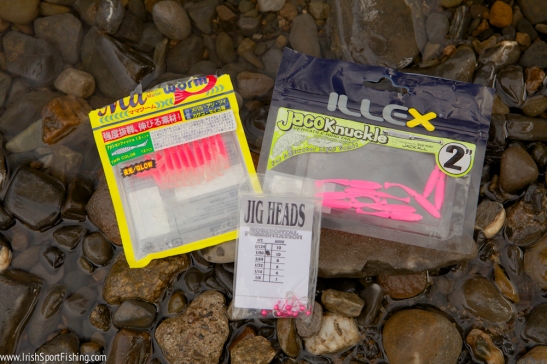 The river gets good hatches of olives during the summer, and some great sport can be had in the evening time. Having said that, it is not an easy river to fly-fish by any means. The best flies I have found are small and sparsely tied – a Grey Duster on a size 20 being my favourite. There is nothing more frustrating than watching a good sized fish slowly rise through the water towards your fly, only to turn away and let it pass at the last second. Similarly, there is nothing more satisfying than spotting a fish, having fly after fly refused, only to eventually fool him into taking.

Sam had never fished here before, and was delighted with his first decent trout on his ultra-light gear.

Dave's first fish of the day.

The Dodder is a great river to learn to fish. Being so local means the time-restricted angler can get out for a couple of hours here and there, and still be home in time for their dinner. The license is only €10 for the season, and this also allows the holder to fish the reservoir at Bohernabreena. I’ll definitely be back down more often this year!

Back he goes, hopefully to provide someone else with similar sport.

Sam gets the runaround from the first good fish of the day! Dave doing the honors with the net.

Sam had never fished here before, and was delighted with his first decent trout on his ultra-light gear.

Dave’s first fish of the day.

Back he goes, hopefully to provide someone else with similar sport.

Sam keeping a low profile, trying to stay out of a fish’s sight

Sam shows the size of the lures used

The Dodder is a fantastic amenity for many anglers

Dave releasing a fish at the weir in Dodder Park